When it comes to widow spiders, Brown is the new Black. 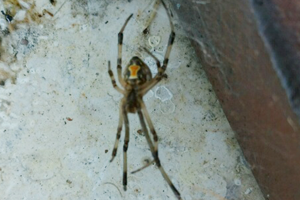 erside and San Bernardino counties, at least in and around urban homes.  Experts believe they may eventually move up the coast of California and into the Central Valley.

Unlike black widows, Brown widows aren’t found in dry habitats or agricultural areas; they love urban environments and structures.  Preferred web building sites include; empty containers such as buckets and flower pots, mail boxes, entry way corners, under eaves, storage closets and garages, recessed hand grips of plastic garbage cans, undercarriages of vehicles that are stationary for long periods and the undersides of outdoor furniture and wrought iron railings.  They choose places that are more exposed than sites chosen by black widows putting them at higher risk for biting opportunities.

Drop per drop, brown widow spider venom is as toxic as oth 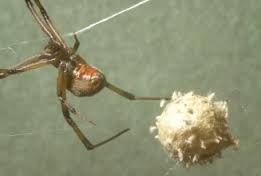 er widow spider species but it appears that these spiders do not have the ability to inject as much venom as the black widow or others of the widow species.  Bites occur mostly through accidental contact and the pressing of the spider against skin.  Symptoms of this widow’s bite include a red mark at the bite site and some localized pain.  The bite is not usually life threatening, and is considered less serious than a black widow’s.  This doesn’t mean that more serious reactions can’t happen, especially if a child is involved.  You can always call your physician just to be safe.

Differences between Brown and Black Widows:

← It’s Not A Mirage! Water is falling from the sky and ants are in the house again! Killer Bees on the Move – →