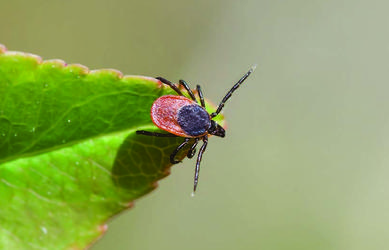 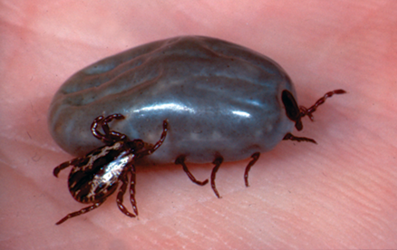 Ticks are a part of the arachnid family, which includes spiders, scorpions and mites. They are slow moving and have an amazing ability to locate hosts. Their sensory organs are complex and they can detect small amounts of gases, such as carbon dioxide, as a way to locate a host. They can sense a host’s presence over long distances and even select their hunting ground based on their ability to identify well-traveled paths. Ticks find their hosts/prey by hanging on to a blade of grass or leaf, with their hind legs and holding their front legs up waving in the air, waiting for something or someone to brush by so they can grab on. This behavior is known as “questing”. In the event ticks become a nuisance our Tick Prevention Service will help in reducing their numbers.

Appearance: There are basically two types of ticks, those with soft bodies and those with hard bodies. Both types are small, but can range up to ½ inch in size. Females are capable of tremendous feedings, and can grow over ten times their normal size when gorged with blood. Ticks have no true head but do have well developed mouthparts that include a barbed beak through which blood is taken. They can survive years without a blood meal. 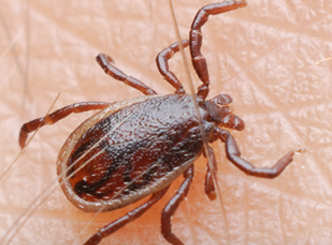 The American dog tick or wood tick is a three host tick that feeds on rodents and lagomorphs during its immature life stages, and large mammals, frequently canids (dogs, wolfs, coyotes, foxes) and humans, as adults. It is the most important vector of the Rocky Mountain spotted fever rickettsia in the eastern U.S. and is also able to transmit the bacteria which causes tularemia (hunter’s disease). It has also been found responsible for tick paralysis in some states. This tick is widespread throughout the U.S. as well as parts of Canada and Mexico. In California, it is mostly found along the coastal areas along the length of the state.

The brown dog tick or kennel tick, is a three host tick that is an important pest of dogs, especially those housed in kennels. It feeds on dogs during all three life stages, but drops off and reattaches during each stage Unlike most other hard ticks, eggs of this tick are laid inside or near housing areas of animals, in cracks and crevices, rather than outside, on the ground under vegetation. This tick is the major carrier of the canine ehrlichiosis rickettsia and the canine babesiosis protozoa in the United States. 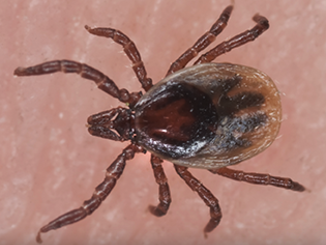 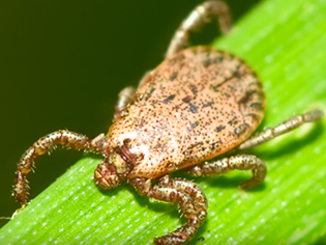 The Pacific coast tick is a three host tick which commonly feeds on rodents, especially squirrels, when immature, and on cattle, horses, deer, and humans as adults. All life stages are capable of transmitting, Rocky Mountain spotted fever to humans, dogs and cats. Nymphs and adults can transmit Rickettsia phillipi and Tularemia to humans, dogs and cats and bovine anaplasmosis to cattle. This tick has also been thought to transmit tick-bite paralysis in cattle, deer and ponies. This is one of the most widely distributed ticks in California.

The Western black-legged tick is a three host tick that primarily feeds on lizards and small rodents during its immature life stages, and large mammals, such as deer, canids, horses, and humans, as adults. It is the major vector of the Lyme disease spirochete and the equine granulocytic ehrlichiosis rickettsia in California. This tick is found in the western U.S. and British Columbia. In California, it appears to be limited to the moister regions of the coastal and Sierra foothill ranges all along the state. Humans bitten by these ticks may notice inflammation at the site of the bite which is slow to heal. These sores do not necessarily indicate disease transmission by the tick (ie: Lyme disease “bulls eye” rash), but are frequently the result of irritation due to tick salivary juices injected into the bite site. 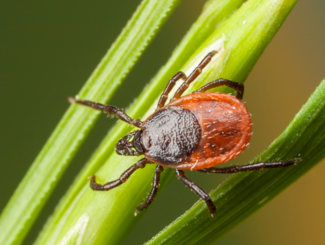 Health Concerns – Ticks generally are not born carrying diseases but pick them up during feedings. They then pass the disease on to other animals and mankind during subsequent feedings. The tick species causes over 65 transmitted diseases. Lyme disease and Rocky Mountain spotted fever are the most well-known of the tick-borne diseases. Other diseases include Colorado tick fever, Anaplasmosis, Ehrlichiosis, Southern tick-associated rash illness, tickborne relapsing fever and tularemia.