Gophers like to be alone and only one gopher will be found in a tunnel system.

A burrow system can cover an area that is 200 to 2,000 square feet. Gophers reach sexual maturity about 1 year of age and can live up to 3 years. In non-irrigated areas, breeding usually occurs in late winter and early spring, resulting in 1 litter per year; in irrigated sites, gophers can produce up to 3 litters, per year. Litters usually average 5 to 6 young. The young are soon ejected from the mothers’ burrow system and sent into the world to dig their own burrows or to take over ones that have been abandoned. 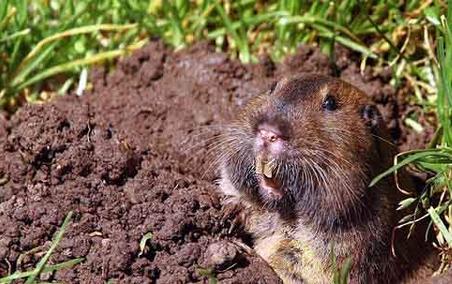 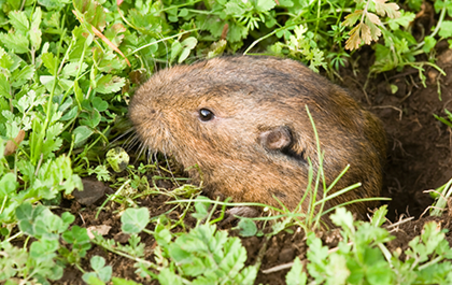 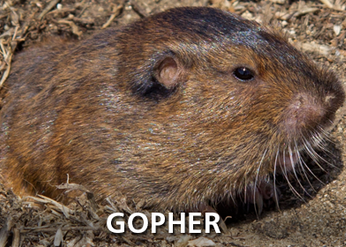 Pocket gophers (family Geomyidae) are aptly named due to their large external cheek pockets, which are used to transport food and nesting material. Pocket gophers are rodents as are voles. They are generally between 7 and 12 inches long, including their tails. Their short coats typically are a dull brown shade, although there are exceptions varying from white to black. Pocket gophers have squat bodies and are reminiscent of rats visually, with beady eyes. They have yellow teeth that are constantly on display, as their mouths shut behind them. If a pocket gopher is present in your yard, you might notice soil heaps that have diameters between 18 inches and 2 feet.

Moles (family Talpidae, order Soricomorpha ) are insectivores, typically gray, black, gold or deep brown in coloration. Their smooth coats sometimes feature white markings, as well. They generally grow to lengths of 6 to 8 inches. Standout physical features of moles include miniscule eyes and ears, wide front feet and angular snouts. They make their homes underground, searching for food by digging around in soil. Their favorite foods include earthworms, snails, beetles, ants and centipedes. They leave evidence of their presence in the form of prominent and unsightly dirt hills on landscapes. They also are extremely destructive to plants, specifically their roots. Moles are solitary animals that come together only to breed. The gestation period of moles is approximately 42 days. Three to five young are born in March or early April. 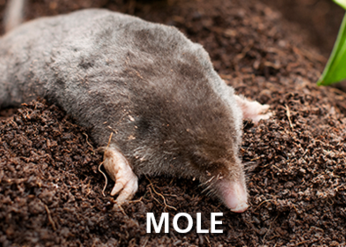 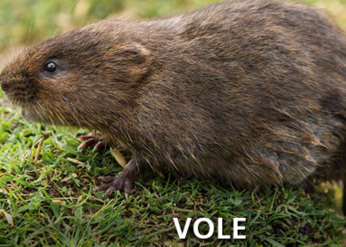 Voles (family Cricetidae) are actually rodents. They are furry animals that usually have grayish-brown coats. Their stocky bodies are usually between 4 and 10 inches in length, which includes the tail. They have stubby short limbs. Like moles, voles are equipped with extremely small eyes and ears that are hard to make out amidst their coats. Vole damage in yards is often characterized by the lengthy pathways they establish. These pathways are usually made of plants, and often bits of grass. Voles also frequently make shallow holes in the ground. Unlike gophers and moles, voles don’t create soil masses on the surfaces of landscapes. The Vole diet consists of seeds, bugs, tree bark and plants. They can be highly bothersome to trees, often tearing through the bark all the way around them. Voles are extremely prolific, with females maturing in 35 to 40 days and having 5 to 10 litters, per year. Litter size ranges from 3 to 6 young. However, voles seldom live longer than 12 months.

While moles, voles and gophers are major garden pests, the Shrew (family Soricidae) are often seen as positive additions to the landscape. These brown or gray creatures spend most of their time doing away with frustrating insects, which are their dietary staple. Shrews also feed on lots of mice They can thrive above ground as well as below. The shrew has a very short lifespan and a high reproductive rate. Many adult females will become pregnant hours after giving birth. Shrews usually do not live longer than 1 to 2 years, but they average 1 to 3 litters, per year with 2 to 10 young per litter. 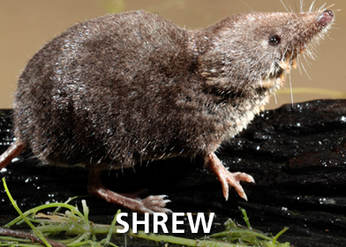