ht to the point, man has a long history with fleas. A fossil flea discovered in Australia is claimed to be 200 million years old. As one of the two vectors of Yersinia pestis, the agents of the Black Death (also known as The B

ubonic Plague) the flea (Xenopsylla cheopis) has contributed, over the centuries, to the death of millions of people throughout the world.  This bloodsucking parasite has been feeding off man and animals alike causing at the least irritation and at the worst death.

On the lighter side, fleas have not only been the inspiration for poetry, works of art, literature and entertainment, but were featured in a whole separate genera of entertainment, The Flea Circus.  Yes, trained fleas entertained thousands with daring acts of strength, h 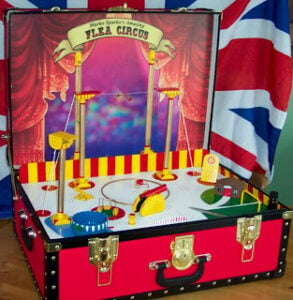 igh jumping antics and clever theatrics. Beginning as sideshow performers for traveling circuses, fleas drew crowds of the curious to this once thriving form of entertainment.

What caused the eventual demise of the Flea Circus? It was the advent of radio and television which left such simple forms of entertainment as the flea circus, as well as other great and classical pastimes, craving an audience.  Out with the old and in with the new and the Flea Circus passes away into the archives of history and folk lore.

Itching to find out more, here are some fun facts about fleas:

Don’t want to start your own Flea Circus?  Call a professional and end your flea woes today!

Just to keep the record straight, a contender with Fleas for the shortest poem in English was composed by boxer Muhammad Ali. On June 4, 1975, after giving a speech at Harvard University, Ali recited the “shortest poem ever written on what it’s like to be as great as Ali”: He is quoted as saying, “Me? Whee!”  Enough said.

← Bites in the Night Eat-It-Yourself Pest Control - Bugs are on the Menu! →