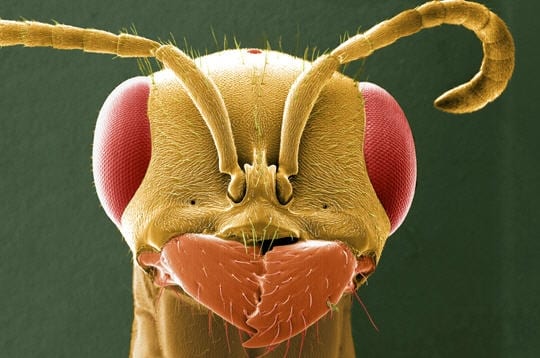 Faces Only a Mother Can Love.

Mother Natures’ beauty is highly touted, but you can’t appreciate her beauty without acknowledging the ugly side of her own “nature”.

Here are 4 insects that represent some of her ugliest creations and they live right here in Southern California.  Some might even find their way into your home.

American Cockroach: This cockroach, despite its name, is not native to North America but was introduced via ships from Africa. The American cockroach (Periplaneta americana), also known as the palmetto bug or waterbug, is the largest common species of pest cockroach and is a pest worldwide. The American roach prefers damp locations and access to water. It scavenges for food but can survive long period 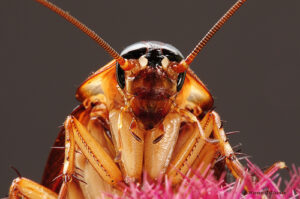 s of starvation. Adults live between 4 to 21 months and the eggs hatch in 4-12 weeks. Their color is a reddish brown.  Both sexes are fully winged and are poor to moderately good fliers, and don’t fly much unless temperatures are above 85 degrees.

When indoors, they can be found in dark, moist areas like basements and crawl spaces, around bathtubs, floor drains, and sewers.

Outside this roach can be found in moist, shady areas like: yards, hollow trees, woodpiles and mulch. At times they can be found under roof shingles. Usually they will live outside, but will wander inside in search of food and water or during extremes in weather conditions.

Jerusalem Cricket or “Potato Bug: Found in western North America, and most definitely in Southern California, Jerusalem crickets (genus Stenopelmatus) or more commonly called Potato Bugs (a tribute to their love of potato tuber, munching), are subterranean dwellers that are rarely seen except during hot summer months or shortly after heavy rains.  Though these imposing bugs — usually 1 to 2 1/2 inches long — have a rather scary exterior, they’re 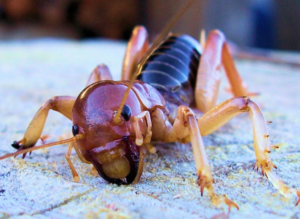 not major hazards to human beings, although they have been known to bite and some to even leap, when handled or when they feel threatened.

These creatures are brown or light yellowish in coloration, uncoordinated in their movements, and rather shy. In maturity, they are free of wings. Their eyes are dark and tiny, and they have oversized big heads. They are sometimes compared facially to human children, and because of that, “child of the earth” is one of their many names. The native Americans called this insect Woh-tzi-Neh or “Old Bald-Headed Man.” In Spanish, it is called “Nina de la Tierra” or “Child of the Earth.” Southwestern Indians once feared it, and called it “child of the desert” and still others call it “Skull Head”, or “Deaths Baby”.   Bye the way, contrary to popular belief, it does not scream like a baby.  Each species of Jerusalem cricket produces a different “song” during mating, but this “song” takes the form of a rhythmic drumming produced when the insect beats its abdomen against the ground.

House Centipede:  Most centipedes are found outdoors however one, the house centipede, is commonly found indoors. It is harmless but will defend itself if provoked. Centipedes (sometimes called hundred legers) are elongated, flattened animals having one pair of legs per body segment. The actual number of legs is closer to 30 than to 100 as their name would imply. Adults are usually brownish and more than 1-inch long. The house centipede, commonly invades buildings. It’s long 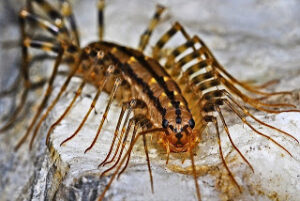 fragile looking legs lift its’ body off the ground while running, making it a fast, efficient runner in order to capture swift moving prey.

These centipedes are known to inhabit damp areas of buildings such as basements, closets, or bathrooms, or anywhere in the home where other insects occur. During the day they hide in dark cracks and crevices, coming out at night to search for insects to eat. Their diet, consisting of small household pests, such as, flies, cockroaches and spiders, place this insect into the beneficial category.

Be careful, when provoked, this centipede can inflict a painful bite that may cause localized swelling, discoloration, and numbness.

Tarantula:  The “Big Hairy” Spider. Spiders are scary in their own right, but this guy or gal takes the prize.  All of California’s tarantulas are members of Aphonopelma, which are ground-dwelling hunting spiders. The California tarantula is nocturnal for most of its life, leaving its hole at night to hunt for beetles, grasshoppers, lizards, mice, scorpions, spiders and other insects. Male tarantulas require 7 to 10 years to mature before emerging to roam the area, looking for females. Whil 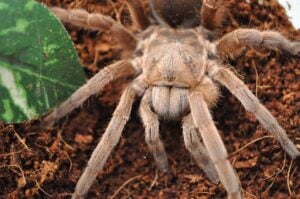 e the male tarantula only lives a few months after it reaches maturity, females may live up to 25 years.

The California tarantula is a very docile animal. Tarantulas are not poisonous to humans (it’s venom being weaker than a typical bees), though all spiders have venom that is effective on small arthropods for subduing their prey. They often develop a bald spot on the back of their abdomen. This is caused by the spider kicking off its hairs for defense. The hairs have uticating (highly irritating) qualities causing stinging and pain in sensitive tissue. These hairs when kicked off may be used to discourage the pursuit of a predator.

Among arachnid enthusiasts, these spiders have become popular pets. Movie and television buffs see them as the perfect ‘Monster”.

Now you can appreciate the beautiful Butterfly!

Spring is fast approaching and mother nature is gearing up to bombard us with her magnificent creations; the beautiful, the ugly and everything in between.