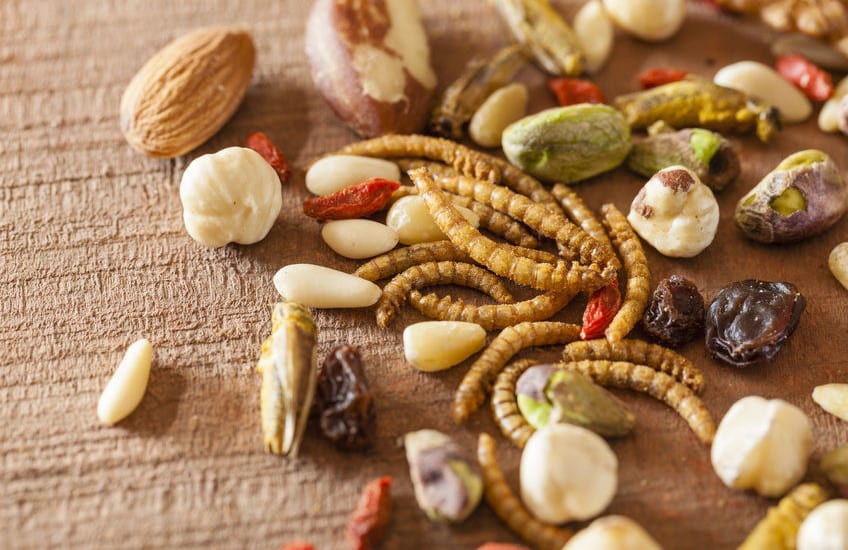 Eat-It-Yourself Pest Control – Bugs are on the Menu!

Bugs have too much of the “Ick!” factor, for you? Can’t stand the creepy way they move. Too many eyes and wiggly legs? Well, think about the crustaceans we already eat. Shrimp, crabs, lobsters — they’re arthropods, just like crickets, lawn shrimp, grasshoppers, spiders and ants. They’re also scavengers, which means their diets are just as questionable as any bug’s.

Among the benefits most often touted by entomophagy (bug eating) advocates, are that bugs are high in proteins that ar

Mini-livestock, bugs, are being introduced, as ingredients, into many culinary creations.  Humans, on average, already unintentionally ingest an estimated 1 pound of insects a year, mixed in with other foods and the FDA acknowledges that it’s not dangerous to have all these, cooked and processed, incidental insects in our food. In fact, it could even be good for us.

Insects are even popping up on Western high-end restaurant menus, which

From the Garden to the Table:

Locust: The locust is even mentioned in the bible (Saint James Version) as a source of food sanctioned by God. In the book of Levitic

us, Moses and Aaron were instructed,  21 Yet these may ye eat of every flying creeping thing that goeth upon all four, have legs above their feet, to leap upon the earth;

All locusts are grasshoppers but not all grasshoppers are locusts. Locusts are defined as “short-horned grasshoppers (Orthoptera: Acrididae).  How to tell them apart, by their behavior and their population density.

Grasshopper: in Mexico, these are eaten roasted with chili and lime, and are

known as chapulines. They are high in protein and calcium.

at both the larval and adult stage. Native Americans roasted them over coals and ate them like popcorn.

e, lawn shrimp and springtails – these are actually terrestrial crustaceans, closely related to lobsters, crab and shrimp. When boiled, they are said to turn red and have flavors similar to their sea abiding relatives.

rm:  Tomato Hornworms can be fried up much the same as the fruit of the plant on which they feed. They taste a bit like green tomatoes, shrimp, and crab.

Agave worm: Also known as the maguey worm, these

Tequila shot with lime and salt

larvae of either the Hypopta agavis moth or the Aegiale hesperiaris are sometimes included in tequila bottles as proof of authenticity and alcohol content (tequila must be of high enough proof to preserve the worm). In Mexico, they are also eaten as part of a meal, and are highly nutritious.

Currently, 2 billion people eat insects around the world, primarily in Africa, Asia, and Latin America, where the practice has a thousand-year history. According to a report by the Food and Agriculture Organization, worldwide, of the 1900 known edible insects, crickets, beetles, caterpillars, bees, wasps and ants are the most widely consumed species.

Here, in the West, insects are pests, destroying crops and gardens alike. Tormenting us by their very presence in and around our homes.  We Westerners have developed whole industries centered around the destruction of “Bugs”.  But what if we embraced the world view?  Our gardens would not only supply us with vegetables and fruits but the harvesting of the pests ruining said gardens would supply us with much needed nutrition and a very “Green” way of accomplishing “Pest Control”.  Just some food for thought.

For tasty recipes, take a look at these sites:

Not into bug munching? Need professional help to get rid of insects at your home? Here is a link you may find extremely helpful: https://gmv491th1i-staging.onrocket.site/