Centipedes have an odd number of leg pairs and do not have exactly 100 legs.

Centipedes belong to the class of Chilopoda. The name centipede, which means “100 legs,” can be misleading since centipedes may have anywhere from 15 to 177 pairs of legs depending on the species. Centipedes are nocturnal hunters that eat insects. Be careful not to touch one because when provoked they can deliver a painful venomous bite. 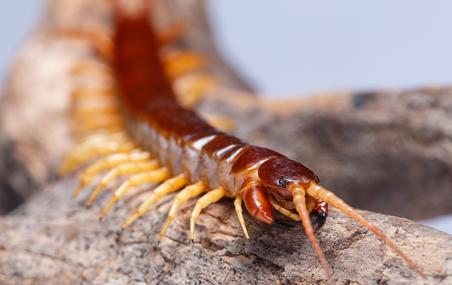 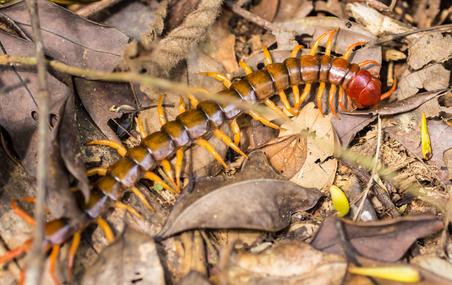 Most of the more than 8000 species of centipedes in the world reside outside. 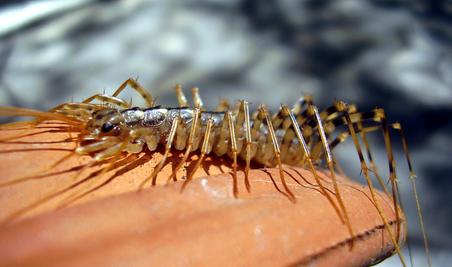 The house centipede is a common pest in many parts of the United States. Unlike most other centipedes, the House Centipede lives its entire life inside a building.

The house centipede is grey-yellow with three stripes down the back and has very long legs banded with white. The largest centipedes are found in the Southwest. The body of this centipede is usually only 1 to 1 1/2 inches long at the most, but it’s 15 pairs of legs make it seem much bigger.

The House Centipede will prefer to live in dark, damp areas such as cellars, closets, bathrooms, garages and drains. They can also be found in attics during the warmer months and unexcavated areas under the house. Outside, they may be found in stacks of firewood, under leaf litter or in protected crevices in rocks or tree bark. House centipedes prey on many household pests, preferring; cockroaches, flies, moths, crickets, silverfish, earwigs and small spiders, but they will prey on almost any insect pest.

These very large centipedes, average about 6.5 inches long, but have been known to reach 8 or 9 inches long. The head and first two body segments are shades of red and the other body segments are black with tinges of green. The centipede’s head has two antennae, and the body has 21 pairs of legs. The first 20 pairs of legs are yellow. The last pair are black and longer that the others. Their bright coloration is very distinctive and effective at warning potential predators to stay away.

Their preferred habitat is primarily protected areas under stones, rotted logs, leaves or bark and where there is suitable moisture. Their diet is composed of insects and other Arthropods and they are very effective predators. They grab their prey using their first pair of legs and stun or kill by injecting venom through the poison claws at the end of the legs. When people are “bitten”, which is very uncommon, there is a sharp, localized pain and swelling that progressively subsides. However, if someone has insect allergies, their symptoms may be more severe. 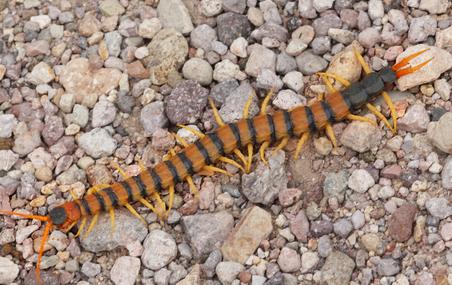 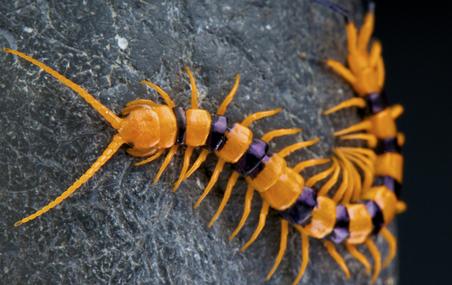 The common desert centipede, also known as the tiger centipede, banded desert centipede or Sonoran Desert centipede, is a nocturnal predator, indigenous to the Southwestern United States, north along the Pacific coast and northern Mexico. It inhabits dry grasslands, forests, and deserts, taking up residence under rocks, inside rotting logs, in dense damp leaf litter and other suitable environments.

Their bodies generally reach 4–7 inches in length. Coloration is variable, therefore, its’ name polymorpha which means “many forms”, referring to its many color and pattern variations.  Generally, this species has a darker brown, red or orange-colored head and lighter brown, tan, or orange body segments with yellow legs. It has also been seen with varied blue coloration. Its’ antennae have seven or more smooth segments. It sports a pair of specialized front legs (maxillipeds) equipped with a poison gland to kill and stun prey. The hind end forms a “pseudohead” that is very similar in appearance to the true head; a long pair of legs extending beyond the body, resemble the antennae of the head. It is thought that this pseudo-head helps protect it from attacks by larger reptiles, mammals and birds that prey upon it. The hind pair of legs, which are longer than the other legs, do not aid in motion but are sensory only.

Eggs of the desert centipede are laid in cavities hollowed out under a rock, in decayed wood or other sheltered sites. After egg-laying, the female winds around the eggs until the young have hatched, and she continues to guard them until they have molted repeatedly and dispersed. The common desert centipede is long-lived, living for 4 years or more.